Lisa “Moose Jockey” Gombinsky Roach is the Founding Director of Counterpunch Parkinson’s, an organisation that is bringing non-contact boxing-based exercise programs to people living with Parkinson’s Disease across New Zealand. 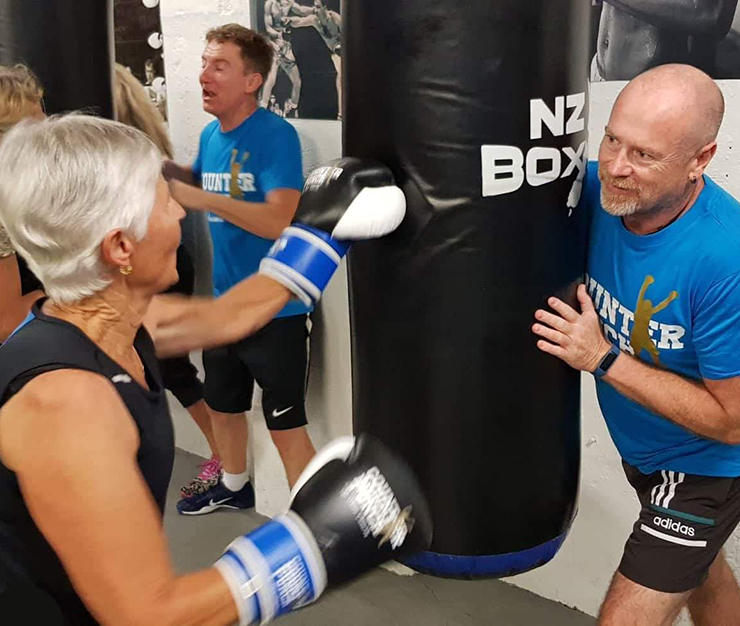 Originally trained as a senior conductive educator, Lisa is a talented and experienced teacher who specializes in teaching movement strategies and skills to people with motor disorders. She has been working in the field for over 20 years with various groups and in private rehabilitation settings in countries including New Zealand, Australia, Norway, Canada and England. Counterpunch Parkinson’s was established at the end of 2016 with only one goal - to help those with Parkinson’s Disease get active and remain active.

In November 2017, Health Central New Zealand published an article describing the benefits of exercise for people with Parkinson’s Disease. ExerciseNZ Chief Executive Richard Beddie explained that “exercise has been shown to significantly improve the lives of those who have Parkinson’s.” Beddie continued to say that the type of exercise is important and needs to have an intense physical component as well as a cognitive one to have the best effects. He states, “things such as dancing, or workouts with certain types of agility components, can be the most effective.”[1]

After that initial boxing session, Lisa was inspired to continue with this mission. That one small non-contact boxing class turned into something bigger than Lisa could ever imagine, and she needed to find a bigger space to hold sessions in. She approached New Zealand heavyweight boxer Shane Cameron who saw the potential and inspiration from this group of boxers. “What I walked into was a room of enthusiasm and potential. I saw people transforming in an instant.” Lisa and Shane sat down and worked out how they could train not only people with Parkinson’s Disease but also create a training programme for coaches so that programmes could happen all over New Zealand. To this day, Counterpunch Parkinson’s Boxing is in nine different regions all over New Zealand, with over 15 gyms hosting non-contact boxing sessions.

When asked about how Counterpunch Parkinson’s has changed her outlook on life and her job, Lisa couldn’t help expressing how inspired she feels. “It is an amazing thing to be a part of something so much bigger than just me and my programmes and my boxers.” But it’s not only Lisa who feels inspired, there have been positive testimonials and praise from some of her regular clients and coaches.

Lia Lardenoye, who has been non-contact boxing since 2017, praises Counterpunch Parkinson’s. “After a class, I feel full of energy and buzzing for a long time which gives me greater relief than a dose of my medication.” Lorrie Bennet, who has had Parkinson’s for four years, raves about Lisa. “The support I personally have received [at Counterpunch] has been fantastic. A key part of that support has been Lisa. She is an amazing coach and such a ball of energy.”

In addition to the exercise component, Counterpunch also gives people a chance to socialise. Simbo, an 82-year-old who has had Parkinson’s for seven years, says “I look forward to my group sessions not only for the exercise but for the social interface with all of the group.”

For some, it has given them a new purpose in life. Coach Johnny Boyle couldn’t help but express how coaching has changed his life. “Coaching at Counterpunch has given me more purpose in life, and the reward in seeing people become more physically able has been so rewarding...I like to think that I have inspired some people which is something I hadn’t expected after getting such a life-changing diagnosis.”

For more information about where you can find a non-contact boxing session in your area or to get one started, please visit www.counterpunchparkinsons.com.